Menu
How To Communicate With Emotionally Distant Men

Home » Women » How To Communicate With Emotionally Distant Men

Five ways to turn a man from being emotionally distant to a man that is attracted to you. 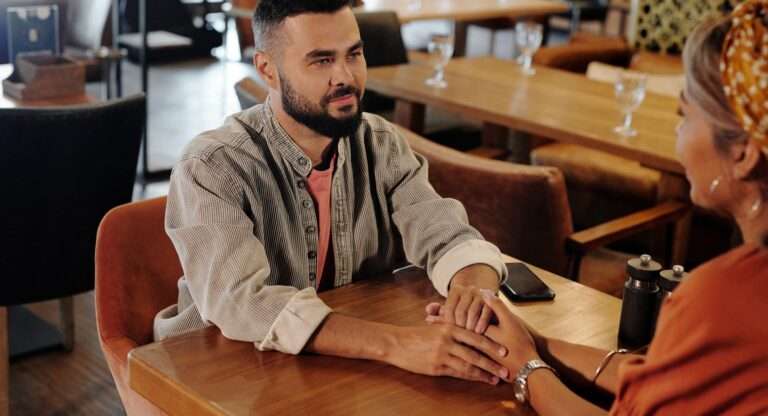 How to Bring Him Closer to You

I realized something important about how men think and act that can make them emotionally distant that I want to share with you.

It’s that men who pay attention and think about the feelings they have, why they have them, what they mean and how to talk about them are rare.

And it’s even more unique and special for a man to pay attention to his feelings in relationships with women and to be able to talk openly about them.

But am I really different than other men?

Ok, I’m hogging this article for myself, my ego is getting carried away…

Here’s what I want to talk to you about: Why can’t men talk about their feelings?

It’s like they’re helpless morons when it comes to knowing and sharing how they feel with you.

And why do men react so weird when you want to talk about things like issues, emotions, relationships, commitment, marriage?

The answer is pretty fascinating but has more than one simple dimension to it.

Let me ask you…
Have you ever asked a man how he feels about you or your situation and then he starts acting all freaked out?

He turns into a deer in headlights. Or even worse, he starts getting angry and frustrated and turns the conversation back on you with unrelated problems or issues.

Well, you’ve run into the brick wall guys have with relationship communication.

And guess what? It’s your fault!

Yep, I’m not letting you shift the blame to someone else for what matters in your life.

As some of my more enlightened friends like to say:
“Don’t go to victim”

If you know someone can’t communicate a certain way, it’s up to you to find a better way. Then once you can reach them you can help them improve.

As the saying goes:
Fool me once, shame on you.
Fool me twice and shame on me.”

So are you continuing to bang your head against the brick wall?

Lots of women do – all their lives over and over in relationships until they’ve become convinced that men are idiots and you can’t ever make things work.

Quit it for crying out loud!

There’s a better way, but you’ll never figure things out just trying what makes sense to YOU.

Don’t be ridiculous! (here’s where I get all up in your face!)

Planning and approaching issues in your life just by what “makes sense” is not only naive, it’s honestly pretty stupid.

That’s why people go to school, they go to college, they study and read, they go through job training and then they go out and make a go of it.

So how much thinking, planning, reading and learning have you done around the things that effect your relationships and your love life?

Hey, not a bad idea. Maybe I’ll write a book about that.

Seriously though… Are you banging your head against the wall?

Or are you looking to learn?

Here something fascinating to learn

Men have a “Secret Button” you can push that will make communicating with them almost effortless.

And if you learn what it is and how to use it you’ll be able to get at what he really thinks and feels… and teach him how to talk to and understand you.

So let me take you through a situation I guarantee you’ve either been in before or you’ll be in with a man:

HELLO! (This is for you, pay attention!)

Pay attention because this is one of those “universal situations” that can mean priceless knowledge for you.

Let’s say your talking with a man you’re interested in and you want to take things to “the next level” but you don’t know how.

And you’ve been waiting on him to talk to you or express his interest or love for a while.

But he hasn’t done that, and you get a little disappointed and frustrated with things.

You’ve tried being patient and talking with your friends but you’ve got to know how he feels and you need things to move forward.

So what do you do?

Well, most women build up everything they’re thinking inside until they have to let it out in one big emotional release.

And guess what men see when this happens? No, they don’t see how much you care or love them and how amazing it is that you want to be with them.

Somehow instead of seeing the good and the positive intentions you have, they see intense negative emotions that they can’t understand.

And men get scared of emotions that are really intense or that they don’t understand. Most of all, they just aren’t used to them.

So when you share your feelings and want to know his feelings for you, he freaks out.

He either becomes the “deer-in-headlights” guy or the “angry-frustrated-scared” guy.

Most women do what makes sense in this situation – they push and encourage the man to talk, to get in touch with his feelings and to share HER feelings.

But men don’t see it as positive encouragement. They see it as you being “over-emotional” and pushy about the issue. (Yeah, I know, men are freakish emotional creatures!)

When you resist or react negatively in any conversation, everything becomes more difficult.

The worst mistakes you can make with a man I call the 4 Deadly Sins:

You will never have any long term success with a man if you keep doing these.

You’ll be beating yourself against the “BRICK WALL”.

So what’s the “Secret Button”?

Well, remember that there’s a catch to all improvements in your life, right? So the same goes for this button thing.

You’ve got to make it happen by changing YOUR communication first in order to push his communication button. It’s up to you to get a man’s fears and defenses out of the way so you can get to the bottom of things. And getting past the masks men can wear with women out of fear is the essence of “pushing the button”.

This is a the “starter” for the conversation that will build an entirely positive context – and it might seem like something you could skip, but it’s actually the most important step. It might be something like starting off talking with positive comments about the time you’ve been spending together and some of the great times you’ve had. The idea is ALL about setting the right context so a guy becomes positive, comfortable and opens up.

This is the first step into “where things are going”. Instead of springing “the talk” on him, keep talking about positives, the good things, the things you want to continue that are WORKING. If you don’t have too many of these things, think harder. You’re interested in a future with this guy for some reason, right? But don’t just compliment him. Make sure it’s about BOTH of you, and how you are together, not just about him.

So now you’re tuning into each other a bit in the conversation and sharing thoughts about the good things you have together.

Then tell him, “Hey, you know what’s great? I bet you and I see things differently, which is OK, but I love spending time with you and we have such a great time together”.

Again, you’re getting into a conversation about relationships that will eventually turn to your situation, but you’re doing it in a way that doesn’t trigger any resistance or fear from the man – and this is what you’re aiming for.

Step 4 and 5 are a bit more complex so I’ll save them for another time.

If you follow these it will blow a man away

And even better, it will create massive attraction!

Yeah, imagine that. By talking about serious relationship “stuff” you won’t scare a guy off. No, you’ll actually make his attraction for you stronger.

Well, men secretly wish that they had women that they felt completely open and comfortable with to share their feelings, thoughts and desires on subjects they usually have a hard time with.

It feels really good to talk about things, especially if they’ve been bottled up!

I bet you’ve felt that too.

When you push the button for a man, he experiences a kind of open and honest communication “release”.

And the more intense the topic or issue is, the more amazing and “freeing” the experience is.

For men, there’s nothing tougher and more foreign than getting really in touch with their emotions and sharing them with someone.

When you’re then one to do this, men almost can’t believe it.

They instantly see you as someone unique, rare, and “cool”.

And when you can talk about tough issues in a way that makes them easy and fun and you have the right amount or “detachment” from the outcome, it makes men extremely attracted to you.

You’ve broken through his emotional distance!

You are the “Modern Siren” and that is your secret power. Whether or not you realize it, you have this power inside of you. When unleashed, it can make a man risk everything—his freedom, his career, his friends, his family—to be with you.

We know this because we’ve been there too and we know how frustrating it is when men don’t treat us like queens (or even treat us as if we were their equal). But there’s good news: Your secret power is still within reach!

You owe it to yourself to become a Modern Siren – click here to get started.

All Men Are Animals
In all honesty, some guys are real animals... but how do you separate the animals from the great catches?
Read More
Relationships Are a Journey
Every relationship is a journey that starts from nothing and takes you places. The final destination...
Read More
Body Language Attraction: His Eyes Will Tell You If He's Attracted To You
Once you get good at interpreting what his eyes are telling you it will become easy for you to judge...
Read More
10 Red Flags In Dating Relationships
Here are some ‘Red Flags' to watch out for in a new partner.
Read More
Could You Be Good For A Day?
We all have daily struggles with our identity and the personality we bare to others. The goal is to control...
Read More
Why The Guy You Love Can't Love You Back
Have you ever been in a relationship, or are in one now, where you don't get the love that you give?
Read More
Asked: Why is My Boyfriend Suddenly Ghosting Me?
You thought everything was great, suddenly he's not available. What can you do?
Read More
Why Men Push Away Their Perfect Girl
When Holly met Colin 3 years ago, she thought they were perfect for each other. They had the same sense...
Read More
How To Make Your Friends With Benefits Your Boyfriend
Changing your relationship from being "friend's with benefits" to a real romance with him in a few easy...
Read More
Romance Isn't Dead... It's Just Sleeping
Creating romance step-by-step to become closer with your husband again. When you can create the signals...
Read More